Lawn Bowling - How the Game is Played 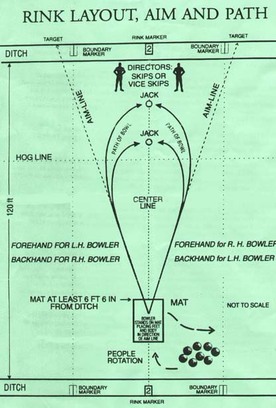 How the game is played.

Lawn Bowling is played on a RINK at least 14' wide on a GREEN at least 120' deep.  All Bowls must remain within the Rink to be counted.  The target is a small round ball called a "JACK" and may be white or yellow.  Bowls come in nine sizes (00 to 7); the heaviest weighs 3.51 pounds.  The BOWL is biased and takes a natural curve.  It must be delivered to allow for this curve, with just sufficient force so that it will stop at the Jack.

The length of each Game is preset by the number of times the Bowls are rolled to the Jack.  When all the Bowls have been rolled, it is an END and the score for each End is recorded.  Each set of Bowls has a distinguishing emblem for identification of the scoring bowls and their owner.

Bowlers must have one foot on the MAT when they roll or "deliver" their bowl.  The Mat is set at least 6'6" from the Ditch line.  The Jack must be set 75'5½" from the Mat and is centered in the Rink.  The Jack remains in play as long as it is within the Rink boundaries.  A Jack may be WICKED into the Ditch and remain in play.  The Bowl that hits the Jack is known as a Toucher, and it too remains in play.  Any Bowl that reaches the Ditch without touching the Jack is taken out of play.

When all the Bowls have been rolled, all Bowls closer to the Jack than the opponents' closest bowl are counted.  The Bowls are then gathered up and the same procedure repeated in the opposite direction.

The following questions with simplified and abbreviated answers are provided to help the spectator or prospective bowler to better understand the sport. What is the object of the game?It is to roll the bowl so that it will stop as close as possible to the jack (small white ball), or attain a favorable position.


THESE RULES ARE THE MOST COMMON USED IN LAWN BOWLING; however, the entire set of rules should be read in the United States Lawn Bowls Association, Laws of the Sport of Bowls; 2004 Rules and Regulations for the United States Championships; third edition.

Etiquette is about the customs and rules that govern social interaction within any specific environment.
For bowlers it is about behavior on the green and in and around the club.

A dictionary definition of etiquette is:
"The unwritten or conventional laws of courtesy between players."

Some of the unwritten guidelines are: